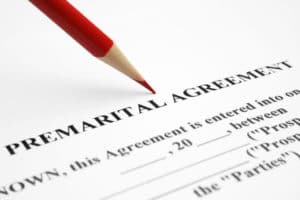 Many couples will enter into a prenuptial agreement (or a “prenup”) before they get married.  These agreements are intended to decide how your assets would be divided and financial terms of what would happen if you were to get divorced.  While it can be uncomfortable to think about separating from someone you are just about to marry, prenuptial agreements are a good idea.  When done correctly, they allow you to make what could be important financial decisions for both you and your partner at a time when you are getting along, rather than possibly having to litigate issues down the line.

Recently, the Illinois appellate courts decided some cases that challenged the enforceability of prenuptial agreements.

One of these cases was In re Marriage of Woodrum. In this case, the Court explained that there are two ways for a prenuptial agreement to be unenforceable.[1]First, courts will not enforce a prenuptial agreement if the party challenging the agreement can show that they did not enter into the agreement voluntarily, or that they entered into the agreement under duress.[2]The second way for an agreement to be found unenforceable is for the party challenging the agreement to show that the agreement was unconscionable both before and at the time it was executed. This may mean that one party was not provided fair and reasonable disclosure of the other’s financial situation, did not execute a written waiver or disclosure about significant assets of the other person or did not, or reasonably could not, have had adequate knowledge of the financial situation of the other party.[3]In the Woodrumcase, the court decided that the prenuptial agreement wasenforceable even though the wife testified that she had not read the agreement and that the husband had failed to disclose the value of a residence and some business interests.[4]The court explained that only “fair and reasonable” disclosure is required, and this does not mean “full and complete,” disclosure. The court decided that because the wife had reason to know about the assets, even though they were not fully disclosed, the agreement was still enforceable.[5]The court also found that because the wife had an attorney and had been involved in prior litigation, she was aware of her own obligation to read an agreement before signing and so her failure to do so did not make the agreement unenforceabl.[6]

In another recently decided case, In re Marriage of Kranzler, the wife alleged that the prenuptial agreement should be unenforceable because she did not enter into the agreement voluntarily, but claimed that she was pressured by her father and her fiancé’s father.[7]Notably, the Wife did not indicate that she felt any pressure from her fiancé.[8]The Court found that there was no evidence to show that the Wife was deprived of her free will when she signed the agreement.[9]