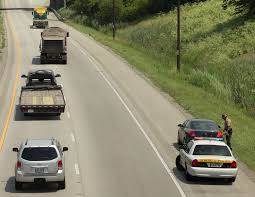 Scott’s Law was enacted in 2002 in response to a fatal traffic accident that occurred on December 23, 2000, in which Chicago Fire Lieutenant Scott Gillen was struck and killed after responding to a car crash.  In response to this, Illinois legislatures passed what is known as Scott’s Law, or the “Move Over law.”

Since the decision to crack down on violators of Scott’s Law, the Illinois State Police have issued approximately 70 tickets the Metro East area alone.[3]  This is a stark contrast from 2018, when only 21 tickets had been written by this time. Officers have been reporting that most of the people pulled over had no idea they were even violating law.  In addition to increasing enforcement of this law, officers are trying to educate the public at large about this law.

The Illinois sheriffs’ association has announced they will be conducting an officer safety and Scott’s Law safety initiative aimed toward teaching departments how to protect their officers and other emergency assistance workers.[4]Some police departments are even going as far as shutting down roadways in both direction when making a traffic stop. Another educational tactic the Illinois State Police are pursuing is to partner with the Illinois State Board of Education to distribute flyers in driver education programs.[5]

In a continued effort to help educate the public about Scott’s Law, Illinois legislators have proposed a new bill that would add a reminder about the law on the driver’s exam and registration renewal notice.[6]  This Bill was introduced last January and passed through the Senate on April 12, 2019, with a vote of 55-0.

For more information regarding Scott’s Law or other traffic matters, contact Sherer Law Offices as (618) 692-6656.