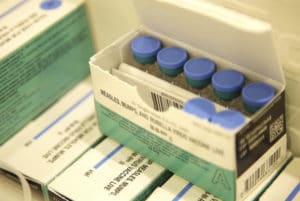 Last month New York Governor Andrew Cuomo signed into law a bill officially banning religious exemptions for vaccinations.  The law was passed after states across the U.S. saw the largest measles outbreak since 1992 and since the disease was declared eliminated in 2000. [1] In fact, just this year, the Center for Disease Control and Prevention has reported that 1,148 cases of measles have been confirmed in 30 states.  This is up from 372 cases reported in 2018 and 120 reported in 2017.  New York seems to have been hit the hardest by this recent epidemic, reporting 550 confirmed cases of measles.  [2]  Because of these staggering numbers, New York is now requiring all students be vaccinated before they are allowed to attend school.  But is this something Illinois should consider doing as well?

However, things maybe changing in the near future.  Seven other states currently have legislation pending that would either tighten vaccine regulations or ban the exemption all together.  Back in 2015, Illinois attempted to tighten the religious exemption by requiring that parents claiming the exemption must obtain a certificate from a physician stating that they had been educated as to vaccine safety.  [4] The idea seemed to be that if Illinois could educate the public about the benefits of vaccines the number of people claiming the exemption would fall.  However, that does not seem to be the case.  Last year, approximately 19,000 children used the exemption to avoid being vaccinated, a 46% increase from past years. [5]Further, Illinois has had 9 confirmed cases of measles so far this year, the most since 2015.

These sharp increases in numbers have prompted the Illinois Department of Health to take a serious look at how Illinois is regulating vaccines.  While it remains unknown whether Illinois will seek to due away with the religious exemption entirely or simply tighten up restrictions, it does appear significant reform is on the horizon.