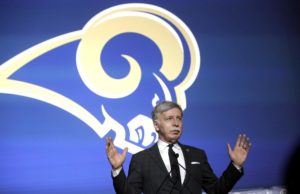 On Tuesday September 3rd the Missouri Supreme Court ruled that the lawsuit against the Rams owner, Stan Kroenke, and the NFL must be heard in an open court room and not behind the closed doors of arbitration.[1] The City’s lawsuit alleges that the Rams violated the NFL’s 1984 league guidelines.  The league and Mr. Kroenke have alleged that any disagreement should be aired behind closed doors in arbitration, rather than in open court, pursuant to the 1995 lease agreement.  However, the Missouri Supreme Court disagreed and ordered the suit to proceed in open court.

Currently, four suits are pending against the Rams after they moved from St. Louis to Los Angeles.  One was brought by fans who purchased tickets and merchandise prior to their departure and seeks to recover some of the money they spent to support the former St. Louis based franchise.  Season ticket holders have sued over the personal seat license, which allowed fans to the right to purchase tickets.  The dome authority has sued over ownership of land in Earth city that previously served as the Rams’ practice facility.  However, the largest suit was filed by the city and alleges breach of contract, fraud, illegal enrichment, and interference in business which caused a significant financial public loss.

The city of St. Louis might be riding high right now, but the fight is not over.  Kroenke and his legal team are petitioning the U.S. Supreme Court to reconsider whether the team’s departure should be settled in open court or arbitration.[2] Kroenke’s legal team has alleged that requiring the suit to move forward in court and not arbitration would cause “irreparable harm” to the Rams organization.  As such, it appears St. Louis citizens must wait a little longer to find out if Mr. Kroenke and other NFL elites will be hauled into an open Missouri court and questioned in front of the public.

For more questions regarding this or other legal matters, contact Sherer Law Offices at (618) 692-6656.