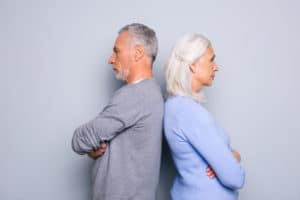 We all thought our lives would be set by the time we hit our 50s – that we would have it all figured out. But life doesn’t work that way. No matter what our age, there are always things that can surprise us, and that can include divorce.

Is Divorce the Same at Any Age?

Yes and no. The laws don’t change, but where you’re at in life has a significant effect on divorce proceedings. For example, one or both of you might have established careers and have compiled significant financial assets, all of which will have to be taken into account when dividing marital property.

If you have kids and one of you stayed home to raise them instead of working outside the home, that will have a significant effect on the spousal support the court will award. The parent that stayed home will find it hard to get a job because of both their age and how long they’ve been out of the workforce, so it’s possible that spousal support will be their only form of income.

If you’re in your 50s, you’re probably starting to think about retirement – or you might even be one of the lucky few who managed to retire early. The reduced income you have in retirement could affect the amount of spousal support you have to pay, assuming you didn’t retire early (before age 65).

If one spouse stayed home to raise the kids and take care of the house, they won’t have much Social Security of their own because they weren’t paying Social Security for all those years they weren’t in the workforce. In some cases, the court might award them a portion of their ex-spouse’s Social Security income, but only if they’re over the age of 62, have not remarried, the marriage lasted for at least ten years, and at least two years have passed since the divorce was finalized.

In general, retirement funds, such as 401k plans, IRA plans, and pension plans are considered marital assets if the parties contributed to the funds during the marriage, though there may be exceptions to this rule for things such as inherited IRAs or other inheritance or gifts.

Pension Plans are also considered marital property (if earned partially or entirely during the marriage) and the Court typically awards each spouse a percentage of the pension plan.  A pension is divided though a Qualified Domestic Relations Order (QDRO), in which case the pension plan administrator will send the payments directly to each spouse when the plan participant qualifies to receive same. This ensure payments to each party in the proper form and amount and allows each party to be taxed only on his/her portion of the benefits.

You also might want to consider trying to negotiate for survivor benefits. Most pension plans give their workers the option of reducing their retirement benefits for themselves during their lifetime so that more can be paid to their spouse after the employee’s death. This is especially common in cases where the wife stayed home while her husband made the money  or the wife earned far less than the husband during the marriage.  Women tend to live, on average, seven years longer than men. That makes for a substantial amount of survivor’s benefits, so it’s worth it to at least try to get it included as part of your retirement division agreement.

No matter what stage you’re at in life when you and your spouse decide to split, you need a qualified family law attorney on your side – someone who will listen to your story and come up with the best solution for your needs.

The attorneys at Sherer Law Offices have been providing legal representation for real estate cases, criminal cases, and all types of family law for more than 25 years. Our experienced divorce attorneys will take the time to really listen to your unique situation so that they can plan strategies that can best protect your best interests.